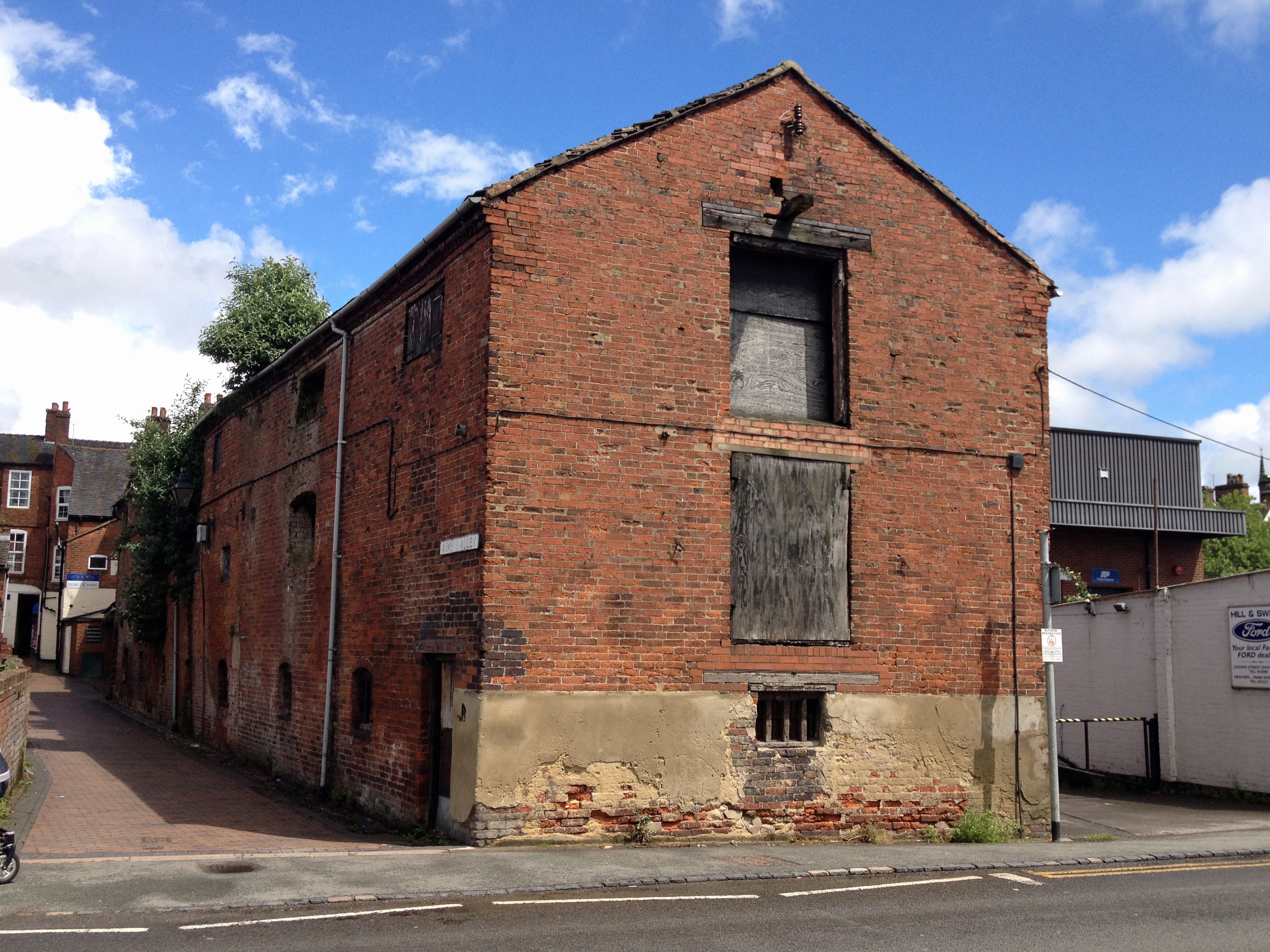 We are pleased to bring news that planning approval has been granted by Stafford Borough Council, following a planning application to convert a derelict historic building in Stone, Staffordshire, for new high-quality hotel accommodation with canal side views, a gym and shops.

A little bit of history

From the earliest possible records, we believe that the Maltings Building dates to around 1780 and formerly part of Joule’s Brewery owned by the Joules family of Bakewell, Derbyshire. Their involvement in the brewing industry originates in the 18th Century with their two sons, William and Francis.

William moved to Salford, Lancashire, and Francis moved to Stone in Staffordshire.

Although it was Francis’ family that made their name in history as brewers, Williams’s family still made their mark in the history books. William’s Grandson, James Prescott Joule was born in the Salford brewery in 1818. He later became famous as a physicist giving his name to the standard measurement of energy; ‘the joule’.

The brewing business was passed down through the generations of Francis’ family and the breweries most famous product was ‘stone ale’. The name of the ale gained copyright in 1888 and was exported throughout the world.

From then onwards the company grew in popularity, winning awards and going from strength to strength trading up until 1970’s when the remaining parts of the business where sold in 1974. The sale became a real focus in the brewing industry and real ale enthusiasts protested against large breweries buying out smaller companies, staging a Campaign for Real Ale (CAMRA).

The event became a real focus in the brewing industry and real ale enthusiasts protested against large breweries buying out smaller companies, staging by the Campaign for Real Ale (CAMRA). Local drinkers wanted to keep Stone’s quality ale, Joules Bitter, the cask beer to be sold in the town, but only one to be available in all of Stone’s eighteen pubs!

It proved to be CAMRA’s biggest protest to date against big brewers. It has been loved by drinkers since the monks started brewing it in 12th Century. It was the oldest brewery in the country and last the Potteries. Although CAMRA’s campaign brought people from all over the country in support of the towns plight and gained extensive media coverage from the BBC, the brewery sadly closed in October 1974.

What was the building used for?

The building was erected by the Joules family in the late 1700’s in Stone to produce malt from the finest barley in Staffordshire. The building was constructed of bricks, roof tiles and originally overlooked mature gardens. The production of malt was a six-stage process before it could be taken to the brewery. This sketch shows an example of how a typical malt building was used to make malt. 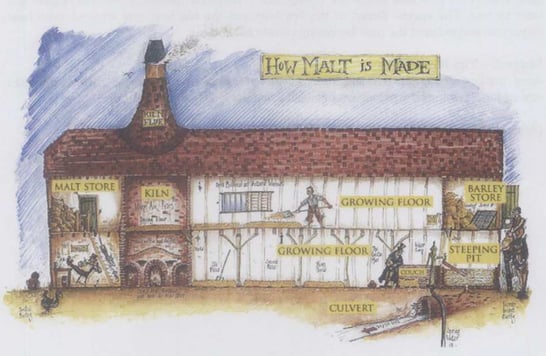 The Maltings Building it is in a relatively poor state of repair and has stood vacant for several years.

Crown Street in Stone can best be described as rear of the High Street in the town centre, comprising of non-active shop frontages, car parking and delivery points. This area offers little to attract people to visit the town centre and could be viewed as a barrier between the canal front and the high street.

The main elevation fronts onto the narrow pedestrianised passage of Adie’s Alley where the windows are boarded up and poorly maintained brickwork is visible.

Although Aide’s Alley has a high footfall from locals, the current condition of the building does not welcome or encourage visitors to go through passage way as a route to the high street, or vice versa from the high street to the canal front.

The restoration of The Maltings will drastically improve the building by sensitively repairing, securing and enhancing the appearance of the building. The building will serve as an attractive new gateway into the town and act as a historical focal building that stands as a reminder of Stone’s rich brewery history.

In addition, development of ‘The Maltings’ site will create a strong link with the neighbouring Crown Hotel, bringing a further increase in footfall along Adie’s Alley and Crown Street and better including these areas within the town centre, creating a circulation of attractive pedestrian access throughout the town.

The Heritage Design Strategy sets out a framework for the conservation of ‘The Maltings’ building. Although we are not creating a building from ‘scratch’ with this project, its marvelous to be improving the quality of the existing building, with the introduction of some new elements such as the new windows, shop signage, new or refurbished timber shutters etc. We like to think that we’re preserving a piece of local history for all to enjoy and for the town to benefit.

The existing Maltings Building is built principally from red imperial brickwork and clay tiled roof. Where possible repairs will be made to conserve the existing materials, or the closest feasible match will replace unusable materials during the conversion.

Other than these small modifications, we aim for the building to appear fundamentally unchanged. It is essential that every element of the historical Grade II listed malt building restoration is given careful consideration, to respect, sensitively retain and restore the original character.

On the ground floor key surviving historic feature in this Malthouse is the kiln.

The kiln is two storeys in height, it has a double wall and the outer space allows access from the rest of the ground floor and when it was fully operational it was used to stoke the kiln. As far as it can be determined it is a particularly complete example, with one of the walls is 13 inches thick to retain the heat to speed up the drying process. Almost all the drying floor and tiles still in place and in good condition.

We intend for the drying floor to be exposed to view as it’s an excellent example of an extremely rare kiln.

To retain the kiln in its entirety it will be cleaned, conserved and repaired. The aim is to use the kiln as the new gym area, with an open gallery that overlooks the kiln and gym space below, creating a distinctive feature room.

The unique kiln drying floor and tiles will be visible and lighting will enhance features to make the best appearance of the space. It currently has a structural timber floor which has luckily provided protection over the years. To conserve as much of the building materials as possible the timber floor is will be treated, insulated and preserved for re-use in the hotel bedrooms.

Another notable surviving feature from the ground floor are the shuttered windows. When they were in working operation, they would slide open along wooden tracks to allow varying degrees of ventilation.

Where possible the existing window and door openings will be restored, glazed and retained. All new windows will emulate the original frame style. They’ll either be painted, or powder coated anthracite grey to reduce the visual impact in relation to original brickwork, so they don’t stand out and to also give a true representation of the building in its heyday.

The Barley Store is a key first floor feature. It holds historical significance as it was the ‘gateway’ to the beginning of the malting process. Barley would have been unloaded from carts parked in now what is Adie’s Alley. The original door used is a typical 18th Century plank construction and it even still retains the original wooden latch.

It is intended for a new luxury hotel suite to occupy the original Barley Store. Where the barley door once opened to begin the malting process, hotel guests will now be able to open their fully glazed doors to their Juliet balcony and look out onto the canal side vista. The existing timber will be retained, fully refurbished and preserved.

Both barley and malt needed to be moved between the floors in the Malthouse and the easiest way of doing this was by raising it in sacks through a trapdoor. Trap doors flaps will be found on the floor in the new bedroom suites. Where possible the operating mechanisms will be retained (refurbished where possible) and protected by means of the new floating floor insulation which will cover the top of the structural deck. It is then intended for the timbers to be left exposed to the rooms below.

Planning Success for The Maltings

The approval of planning permission for The Maltings has now allowed the procurement and construction progress to begin. This historical project will support the local construction economy, presenting the opportunity for skilled trades and craftsmen to work on this specialist heritage conversion project.

This new development will also provide a much-needed economic boost to the canal side town. The Maltings building stands in such a prominent position in the town, visible by road, canal and foot. The finished project will indefinitely attract attention drawing people through the new attractive pedestrianised Aide’s Alley into the town from the canal side, and vice versa from the town to the canal.

The 14 new bedroom suites will attract business and leisure visitors to the stay longer in Stone, making use of the shops, bars and restaurants. Subsequently the extra hotel space has the potential to create additional employment, along with new businesses and jobs in the retail units.

We have carefully considered and respected the Maltings Building to design a sympathetic yet high quality refurbishment of the vacant run down historic Grade II Listed building.

We worked very closely with the conservation officer at Stafford Borough Council to ensure all aspects of the project remained sensitive and sympathetic to the locality of the site, and the existing building.

A close collaboration between the client, the conservation officer, the planners and our team enabled us to deliver a design that conserves and retains as much of the working aesthetic of the buildings as possible. We have incorporated new architecture with a sense of the old history of the existing building. This allows the current additions to be interpreted as an extra thread to the historical context of the building, without affecting the character, yet enhancing its originality.

Want to find out more?

Click here to find out more about how Carl Croft met with Joe Crowley in Stone, Staffordshire, to film Series 5 of BBC One's Britain's Empty Homes. The interview reveals more about the fascinating history surrounding the Maltings building and Stones brewing history.

We've worked on a number of historical buildings. Why not take a look at a few more of our other projects here?

What do you think?

We'd love to hear your thoughts about the project. Why not leave a comment below or lets get social and chat on social media?

Stay up to date with the Maltings progress by subscribing to the latest news below.