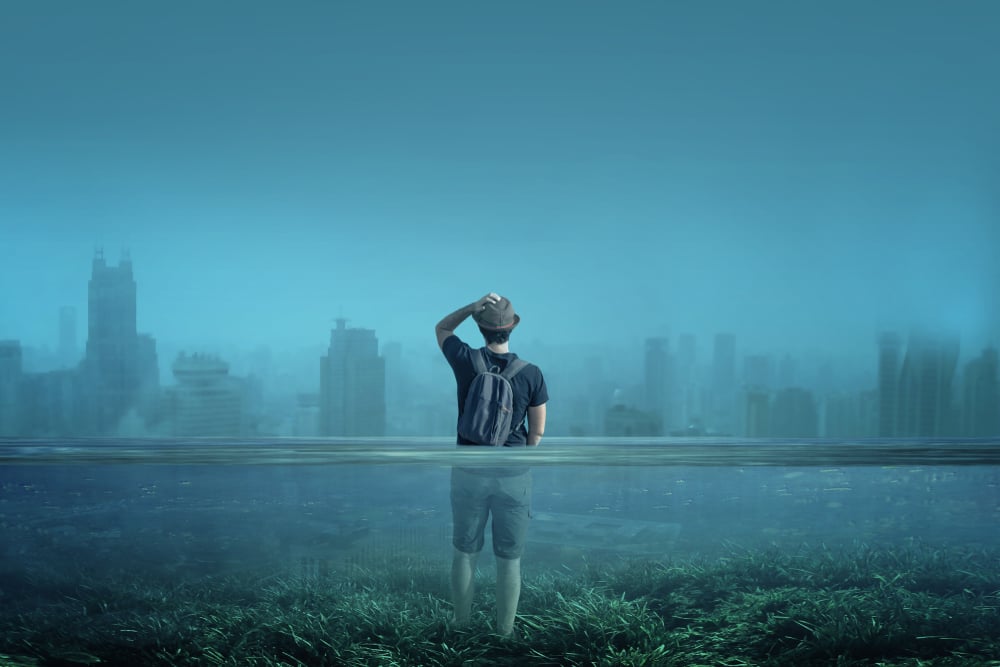 The Climate Crisis: A new decade for change

The signs of global warming are everywhere, and are more complex than just climbing temperatures.

Scientists agree that human activities have, and still are, driving a worldwide climate crisis. We all know that it's happening and we can't escape from the impact it's having on the planet. The media bombard us almost daily with horrific images and there are obvious signs all around us. Carbon pollution is warming the planet meaning that the world's natural systems are out of balance. Throw into the mix pollution and a rising global population and it's a recipe for disaster!

We don't have to look far to see the affects. Hotter temperatures, the horrific fires blazing across Australia, melting Arctic ice, stronger and more frequent storms, rising sea levels; all threatening our health and our existence into the future. 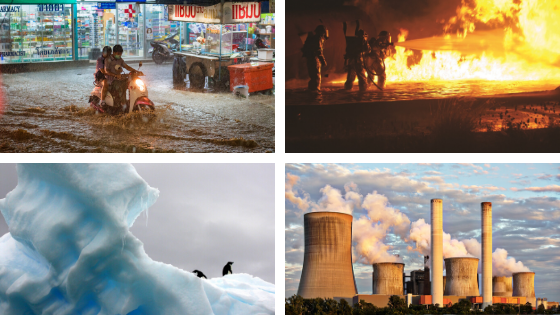 As we begin 2020 we can't help but notice in the media that it's individuals who are making a stand against climate change and not governments. Some leaders are pledging to be zero carbon by 2030 and 2050, but have you seen or heard of action and evidence to prove that positive changes are actually taking place by world leaders?

If governments continue to avoid actual action right now we're heading for a global temperature increase of 3C to 5C by 2100. (Source NOAA) If this actually happens what will the world be like to live in?

Let's take a trip into the future.

Buckle yourself into our Tesla Time machine, the battery's charged and ready to roll as we set the co-ordinates for 2050, and speed up to the crucial 88mph needed to be transported into the future...

"Good morning, it's Monday 20th January 2050 and you're listening to BBC Radio 2. Here is today's news and weather update;

The news bulletin on the radio ends and your Tesla comes to stop on the carless street in Buxton High up in the Peak District. The roads are empty except for a few electric cars, hundreds of people are out on foot or by bicycle and seem only be staying in the vicinity of the town for their needs. The number of people is overwhelming. It's evident that the world’s population has grown significantly by billions people since 2020!

Homelessness is rife on the streets of Buxton and another influx of people from southern Europe will only add the escalating problem for the town. It's clear to see that the ongoing cycle of severe weather conditions has lead to the catastrophic effects of food and water becoming scarcer. If forecast is accurate and the rains become heavier, even more people will continue to flood in from rural areas to  Buxton, adding to the existing hardships faced by the City. 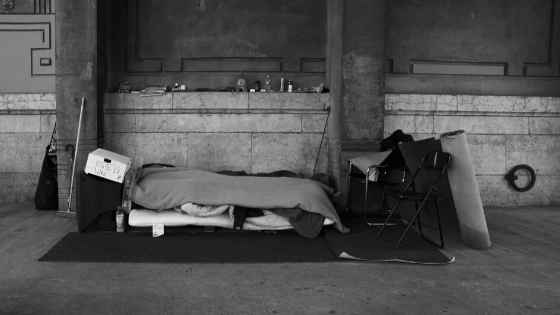 It's frightening to see Buxton suffer at the hands of this hellish man made climate. It was once a small rural town in the Peak District, but due to it's height above the rising sea levels, its been transformed into a mega city with high rise buildings as far as the eye can see. Each building has its own solar systems, “living” walls with plants and all the apartments seem to have balconies to grow a few vegetables. 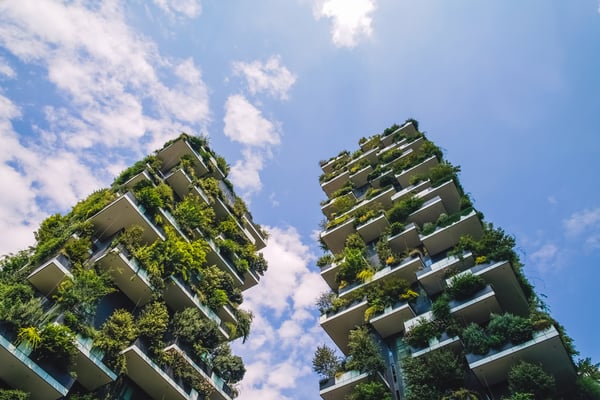 Outside the Tesla it's roasting hot, with temperatures averaging around 25C, in January! The earth’s temperature has risen just as the scientists predicted and the planet is now inevitably heading for average 3C or 5C increase, possibly within the next 100 years.

Giant electronic advertising billboard signs flash up various adverts but the ones that catch your eye the most are those for food. It's not just because you skipped breakfast and your stomach is starting to to grumble. It's the cost of the food that grabs your attention; the prices are astronomical!! The inflated prices must be due to the increase in the number and the severity of floods and droughts affecting the world’s main food-growing areas. Hence the reason why people seem to be growing their own.

Although the city is densely developed and highly populated the air seems to be clean and it's strange how silent it is. There are very few vehicles on the street and the ones that are around are electric. Looking up the skies are empty and there are no aircraft flying overhead at all. Banning carbon fueled travel seems to have clean up the air in this city. 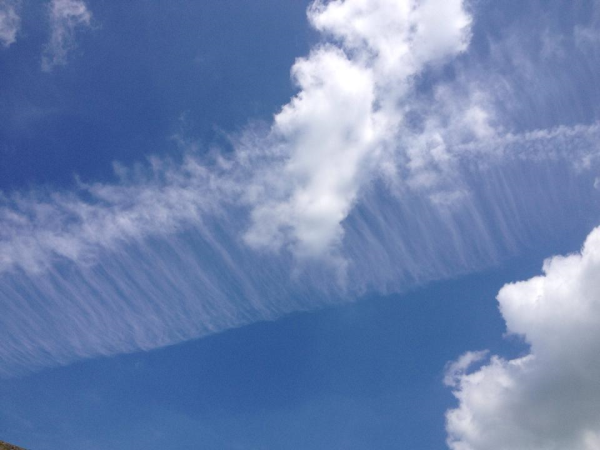 But people don't appear to need to travel much now. It's clear that the local authority has thrown money at protecting infrastructure, helping people adapt to the higher temperatures and ever more frequent storms. Surprisingly there are still some green spaces left and some man-made structures have also been created to mimic the trees that once stood shading the streets.

It's clear that the government has taken some national action against climate change, but it's obvious that not enough was done to change the impact in the global warming due to the environment surrounding you. Even without climbing the high rise buildings glimpses of the water can be seen between the urban sprawl of in the distance. As predicted the the continuing loss of ice at the poles and in the great mountain ranges has meant that sea levels have risen faster and higher that you believed would be possible possible 30 years ago. 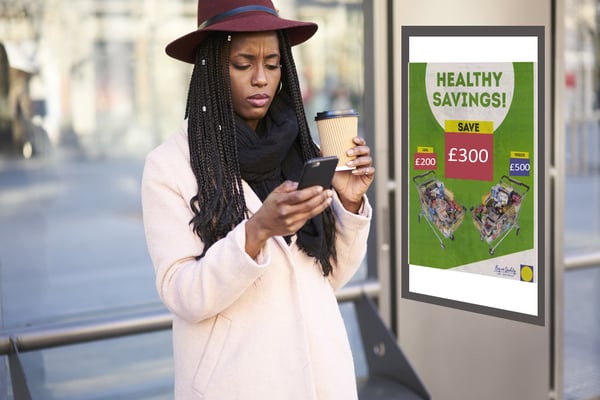 This must be why people have sold up and moved to the higher land here in Buxton you think. You overhear an older couple chatting mid conversation close by saying, "Did you that she's been told that the underground water supplies to her block of apartments are beginning to be polluted with seawater and they might only last another 10 years. If that happens they've told her that her apartment block will be deemed unsafe to live in within 20 years because of flooding. But it’s far worse in our side of the city. What's it like over by you?"

As you walk along the street there is an apparent divide between rich and poor. You can see that the extremely poor don’t live in robust houses, and they don't have as high walls to defend themselves from the storms and floods. Without money it's not as easy to adapt compared those living a high rise lifestyle. But if they left, where would they go? Every year their homes decrease in value compared the high rise empires alongside. Being so close to the sea only the properties that are higher or with excellent defenses against the elements now attracts premium prices. 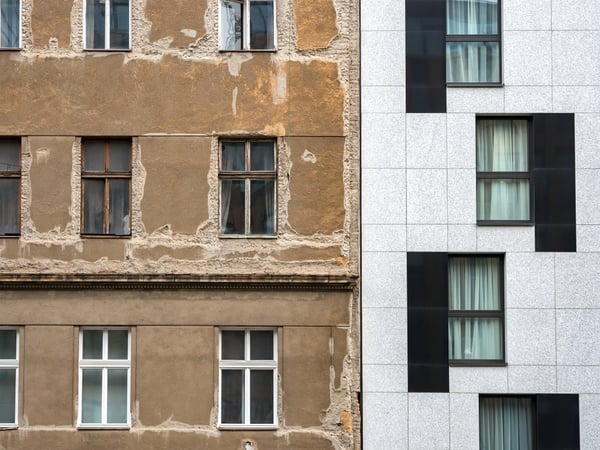 All around you is the catastrophic reality that everyone was being warned about in 2020 and the years proceeding. The predictions and scientific research is accurate. The science evidence was there for us all all to see now in 2020. We were facing an unprecedented global emergency and ad life or death situation of our own making.

Time to travel back and make a change...

Small individual changes that we all make, like walking instead of taking the car, turning heating down a degree and switching lights off when we leave the room don't really make much of a dent in the problem facing us. To truly make an impact action must be taken by world leaders to ensure that everyone around the globe, whether you're a business or an individual adapts sooner rather than later. The evidence is all around you. To start making a difference we need to be compelled to change otherwise things will continue on the same course, where a green business or lifestyle is a personal choice rather than an obligation.

Government investment and action needs to start in 2020 as we're all in a race against time.

What can we do?

We take the warnings regarding climate change very seriously at Croft Architecture and we endeavour to help our clients to create sustainable buildings that are low-energy or even energy-positive.

Building Regulations currently dictate the minimum requirement for the energy efficiency of a building under Part L, but the regulations alone are not enough to help reverse the effects of climate change.

At the outset of all projects we chat with our clients and discuss the advantages of an energy efficient build. It’s not just residential clients who can benefit. Schools, offices, health care facilities, hotels or even apartments can be ultra-low energy. The basics apply to all, lower running and maintenance costs, healthier and happier environments and in there better for the environment too.

All clients, whatever the project, can gain from a more sustainable design, or even an energy positive renovation or build. It’s our responsibility as architects to educate and advise clients that a sustainable build doesn’t just help the environment.

For example, a sustainable school will benefit from lower running costs, but it also provides an educational live example for the students, providing real life evidence of how we can all live, work and grow in a sustainable environment. Everyone’s a winner!

To find out more about creating low energy or zero carbon buildings you can read more in our short blogs here.

Just because projects are energy-efficient, it does not mean that clients must compromise on their design aspirations or requirements. We’ve recently had the pleasure of working with a retired couple who wanted to future proof their home to improve accessibility and use renewable sources of energy to power their home. They aspired for their home to provide level easy access throughout and they wanted to ensure that their home stayed relatively maintenance free, cheap to run and healthy to live in too. Their design resulted in a highly energy efficient home. Read more about their project here… 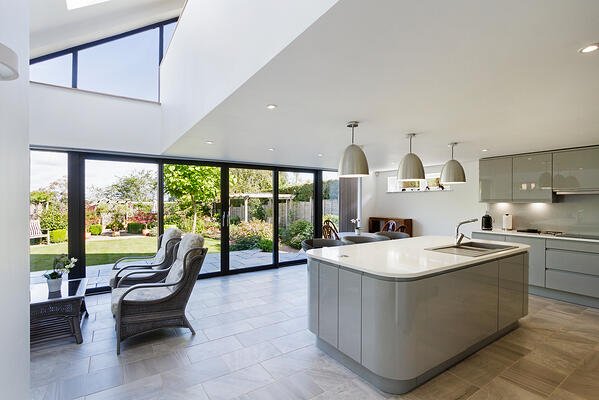 The UK Government has already set a 2050 target - to reduce emissions by 80%. This was previously was agreed by MP's under the Climate Change Act in 2008, but it has since been amended to the new, much stricter, goal to become "net zero" on greenhouse gases by 2050.

We know it can be done, but it unfortunately it needs policy, regulation and incentives in order for it to become ingrained into all design and business practice for all.

The Committee on Climate Change says cutting greenhouse gas emissions to zero by 2050 is necessary, affordable and desirable. Here are some of the actions needed to make that happen:

The everyday choices that we make have an impact on the environment. As we know the earth only has limited amount of natural resources, from food and water, to fossil fuels. We all have a limited amount of time to reduce the emissions and pollution in order to reverse the effects on the planet and for us all to stay healthy.

Talk to us about how we can help you to make a sustainable change with your existing building or prospect project.