Double the size and double the benefit? 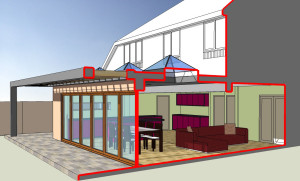 There are some substantial changes to the General Permitted Development Order (GDPO) affecting change of use of a number of property types for alternative uses. However I'd like to focus here on the householder’s extended rights to single storey rear extensions covered by part one of the GDPO.

An ‘application’ for permitted development?

You will need to notify the local authority before commencement and following completion.

That might not sound significant, but the ability to press on with small works unchecked has characterised permitted development for householders. The commonly held perception that double the extension size is a planning free-for-all is very far from the mark.

The new rights would typically be used where an extension to a homeowner’s property would be greater in length from the existing rear wall than currently allowed under the existing permitted development rights, but not longer that the revised limits allow.

This would be between 3 and 6 metres for attached properties and between 4 and 8 metres for detached properties. Effectively the new 'allowance' doubles the potential permitted development length from the rear wall of the existing property.

The 2013 permitted development rights are available for construction within the next 3 years and must be completed before 30th May 2016.  Upon completion of the extension the applicant needs to notify the local authority.

As with the existing permitted development rights, property on Article 1(5) land and sites of special scientific interest are excluded from the rights.

You may think, “great, no red tape!” Well not quite…

A rose (or planning application) by any other name...

Not only does the proposal need to be designed to comply with the permitted development framework of allowable development, but you would need to notify the local authority before you start work providing the following information:

There is no fee for the notification and the local authority then has 42 days, or 6 weeks to complete their process and notify whether the development can proceed or not.

As with a regular householder planning application, the local authority has to consult the immediate neighbours providing a minimum 21 days for them to respond. If no objections are received from neighbours then the applicant will be notified that the development can proceed.

If neighbour objections are received (which is unfortunately a common reaction of neighbours to most development in today's communities), then the local authority will require a prior approval application, and they will need to assess the impact of the proposals on all adjoining properties (not only those who make objections).

After due consideration, the local authority notifies the applicant within 42 days whether or not their project is considered acceptable.

For those notified that their project is refused permission, the applicant would have the right to appeal.

What is the real benefit?

Why bother with permitted development 2013 when you could submit a householder application with a design exactly as you want it? No notifications of commencement and completion, a 3 year valid planning period to start construction from the date of approval. What if you under the new rights you don't complete construction before the time limit?

After all, you'll still need to design, take account of the structure, drains, Party Wall and Build over Sewer Notices etc. So why not just apply?

In order to build, the developer would need either written notice that 'prior approval' is not required, or written notice providing a 'prior approval'. If the local authority fails to notify the developer within the 42 day period, then they can proceed to build the extension in any event. The onus is on the local authority to perform - a definite benefit!

Can we expect the new changes will be significant to "stimulate economic activity, cut red tape, and support local sustainable development?"  This is yet to be seen, but for householders alone (Part 1), I doubt it.

Surely it's important to promote these objectives consistently and not just for a 3 year period?

What we can possibly expect is that the over-stretched planning authorities will have to perform the same or similar duties for many householder schemes except for no fee, and in a shorter period of time. It will be interesting to see how effective and sustainable this approach is.

Could permitted development 2013 be the pilot scheme for a more streamlined and timely applications service? Lets hope so.

What do you think about the new permitted development changes?

Are they a good thing, or a way to upset neighbours, and promote poor developments?

How will this affect you?

We'd love to know your thoughts so please comment below...