After months of preparation and gruelling training sessions in the gym, pool and of course the bike, Saturday the 6th June 2015 the day of The County Air Ambulance HELP Appeal charity cycle ride had arrived!!!

It was judgement day!!

Apart from a few super fit folks on the team, today was the day we found out if we had done enough preparation in the saddle to get us 124 miles from Croft Architecture in Stafford, through the undulating hills of Shropshire to the mountainous peaks of Snowdonia and then onwards to the finish in Caernarfon, North Wales.

What’s the weather going to do? 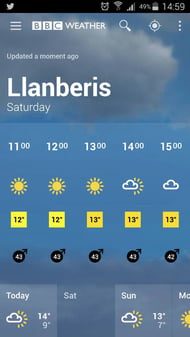 Our whole team had been on a constant weather watch all week with everything crossed for dry and calm conditions, or maybe even a nice tailwind to give us a helping hand.

However, nothing ever goes to plan does it?

Although the day was forecast to be dry, cool and sunny, the wind was going to be our nemesis. We had to contend with the prospect of 16mph south westerly head winds and predicted gusts of up to 43mph! This was not what we wanted to hear.

Nevertheless, at least it wasn’t raining (not yet anyway).Wind had to be better than rain; right?

Plus, the forecast of windy conditions increased the magnitude of our challenge and encouraged more people to sponsor the team, raising additional funds for the charity. 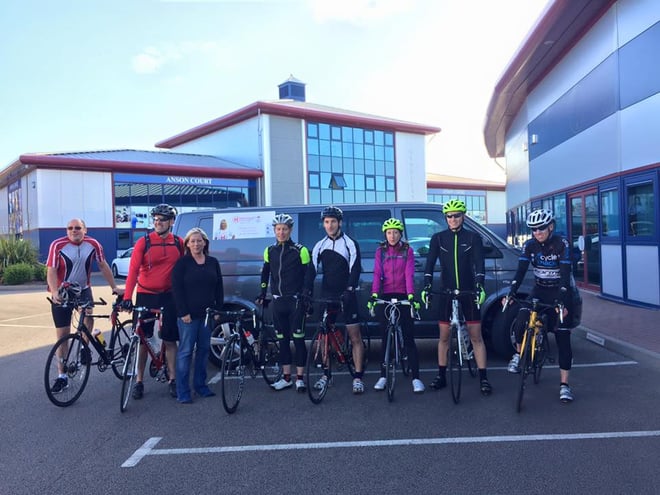 After a quick photo opportunity at Croft Architecture our team set off as one large group of cyclists in attempt to conserve energy between us, as we contested with the strong headwinds from moment we left Stafford.

This was not going to be easy!

The wind was certainly our arch rival with a constant headwind to battle as well as bracing yourself on bike for blustery gusts as we approached open fields and driveways. Despite the strength of the wind, the team worked well together. Our training sessions had definitely paid off; practising cycling close behind one another to conserve energy and making the most of each other’s draft.

The fittest and most experienced riders rotated the lead at the front of the group taking the brunt of winds force. This certainly allowed us all to maintain a fantastic average speed of 17mph for the first 40 miles!

We were making amazing progress even before our programmed lunch stop at 71 miles.

After a quick pit stop in Ellesmere, Shropshire to refuel our bodies with much needed water, bananas and anything else we could eat with a huge carbohydrate reserve, our group decided to split into two to allow traffic to pass more easily and safely along the country lanes. 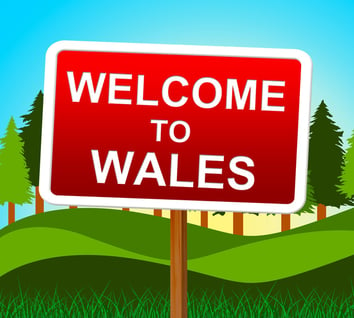 Our smaller groups made fantastic progress through the windy Shropshire lanes and onwards to the Welsh border.

As we cycled on and into Wales we received an incredible amount of support from passing motorists and especially motorcyclists beeping their horns with encouragement.

It was great to have Lesley Knight from The County Air Ambulance Trust HELP Appeal following us in our support vehicle, backing us on route to give us a much needed boost and also a reminder of why we were actually doing the ride, not to mention a few cheeky Jelly Babies and the odd Jaffa Cake too!

As we headed out of Llangollen it was as though someone had switched the wind off. Although we were climbing up and out into the Welsh hills. We were completely sheltered by a huge canopy of trees that enclosed the road like a tunnel. It was amazing to have a breather from the constant beating we were taking from the wind.

We spoke too soon

The sheltered route didn’t last for long and we were soon exposed to the elements once again. As we approached our lunch stop at The Rhug Estate Farm Shop just outside of Corwen, there was no way of easing back as we certainly felt the force of the wind.

As we passed the exposed open fields we were blown into the centre of road close to oncoming traffic! All we could do was hold on and battle it out until we reached the safety of The Rhug Estate car park where the rest of our team, family members, a sports massage from Alison George and lunch was waiting for us. 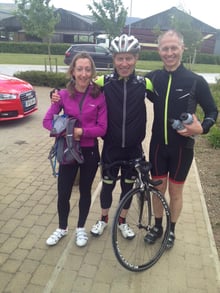 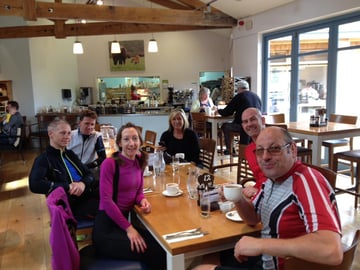 You might think that the hard work of covering three quarters of the total distance of the ride had been done and dusted prior to our lunch rendezvous at The Rhug Estate.

Wrong, we all knew that the next stage was not going to be easy at all.

From The Rhug Estate the route took us onwards and upwards to the mountainous climbs of the Snowdonia National Park. Oh yes, and don’t forget our good old friend, the wind.

As we set off in our smaller groups once again to ease the traffic flow along the busy A5 it was obvious that this next section of the ride was going to be tough, not from the number of miles covered, but from the sheer force of the wind. It was getting stronger and the route was extremely exposed for miles around. 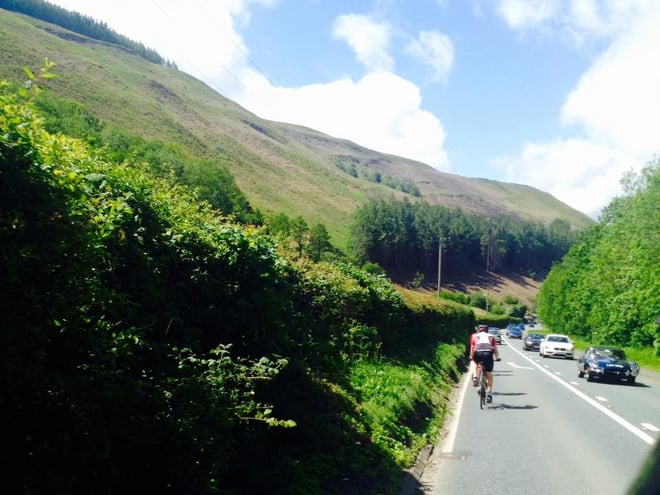 We’re unsure how we all managed to stay on the bikes, as gusts of wind whipped at our wheels pushing us sideways. Cycling faster, harder and holding on was the only way to continue. It was such a relief to reach small sheltered sections for a quick breather before bracing ourselves once more.

Time for a pit stop

Although it was only 43 miles from The Rhug Estate to Caernarfon we needed to conserve our energy for the section out in the mountainous back and beyond; Snowdonia.

The brief but steep decsent into Betws-y-Coed provided a little relief, and quite a bit more fun as we reached some of the top speeds on the ride, taking the fast open corners into the village.

It was time for a quick pit stop at Betws-y-Coed. We stocked up on the essentials for all cyclists, a pint of larger and a packet of crisps!

No, seriously it was time to fuel ourselves up ready to go 20 miles up hill!

Up, up and up some more

The route out from Betws-y-Coed followed the river valley up into Snowdonia. As we reached Capel Curig and the wild windy open peaks of Snowdonia the clouds descended and it began to rain!

Just what we needed as we were approaching the hardest climbs. However, we maintained our aerodynamic group formation and worked well as a small team together, as we now battled rain htting us in the face like a swarm of bees. 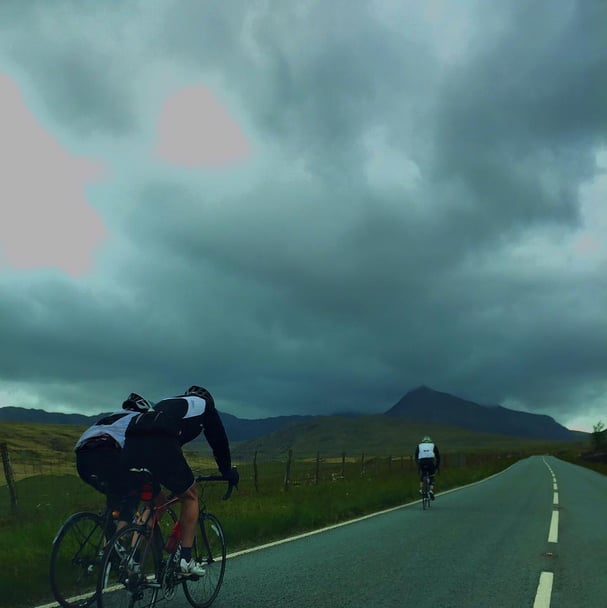 Are we nearly there yet?

The moment we all reached the Youth Hostel at Pen-y-Pass we knew that our hard work was almost complete. We had only 12 miles remaining. Woo hoo!

The rain had stopped and the sun was even making an appearance. It was time to descend and enjoy the fantastic scenery that Snowdonia has to offer.

We were now on the last stretch to Caernarfon and it felt good to know that we were nearly there.

We had done it!

As we arrived in Caernarfon at the Anglesey Arms next to Caernarfon Castle and overlooking the Menai Straight, we were welcomed by our fellow riders, family, friends and supporters. 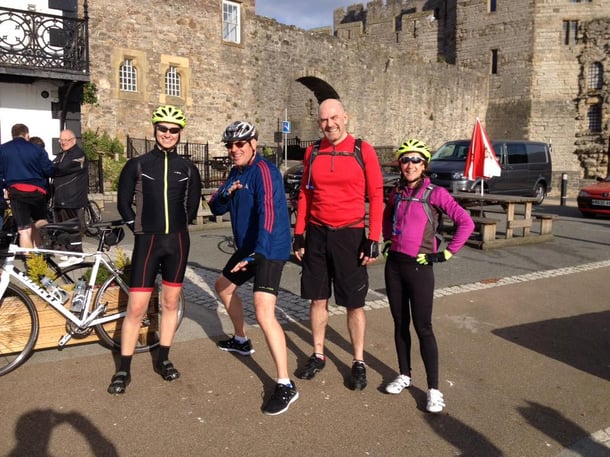 There are so many people that made this challenge a success. So many in fact, that it would be quite difficult to mention them all, but there’s no 'I' in 'TEAM' so let’s have go!

Their idea has been transformed into reality, with the help, of course, from us the cyclists (who have done the physical hard work) by sitting on our bottoms for 124 miles!!

Jokes aside, although cycling was the main part of the event, thanks must be passed to the family, friends and colleagues who have supported everyone through the training and preparation leading up to the day of the ride.

Without their support, I dare say the ride wouldn’t have been as successful.

Finally, the most important thanks goes to all of our sponsors! Without the kind donations and support to our cyclists the day would never have happened either.

Carl Croft and I would like to take this opportunity to thank everyone that has sponsored us to get tired and sweaty in raising oodles of money for The County Air Ambulance HELP Appeal.

Gallery of 'The Good Souls'