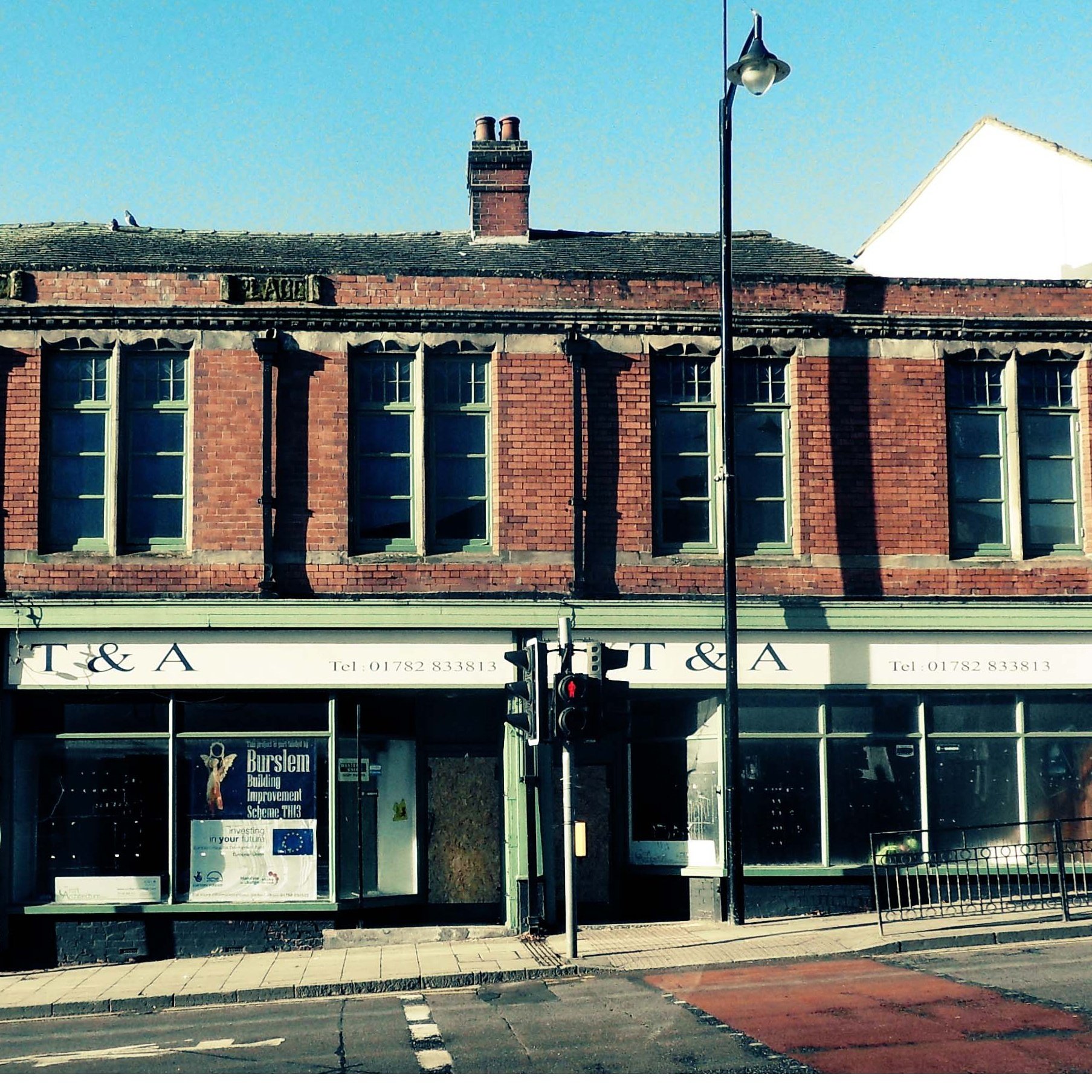 We were appointed by the Burslem Building Improvement Scheme (Townscape Heritage Initiative phase 3 – THI3) for the restoration and  refurbishment of 2-4 Swan Square, Burslem, Stoke on Trent.

The Burslem Townscape Heritage initiative (BTHI) is an economic regeneration led project that aims to restore the character and historical importance of Burslem’s street scene within the town’s conservation area with the funding available.

2 – 4 Swan Square was once one of the most prominent buildings located in the heart of Burslem’s town centre. The historic property was formerly known as ‘Eley Place’ and was associated with the wealthy tea merchant, John Eley. Eley accumulated a huge fortune from his trade and purchased a number of properties on Swan Bank.

As with many buildings throughout Stoke on Trent the historic notability of this property within such significant industrial town has been forgotten. Over the years the building has been used by numerous retailers and the importance of preserving its heritage has been neglected. It now needs significant architectural attention & funding to successfully restore its former identity.

The buildings with a significant heritage in Burslem and Longton, Stoke on Trent are being given a new lease of life through the Burslem Building Improvement Scheme (Townscape Heritage Initiative phase 3 – THI3).

Approximately £1.7 million is being spent on transforming properties to their former character. The project is being funded by Heritage Lottery Fund (HLF), European Regional Development Fund (ERDF), English Heritage (EH), Architectural Heritage Fund (AHF), Stoke-on-Trent City Council (SOTCC) and also the property owners. The aim is to encourage business back to the town, providing a much needed boost to the local economy.

The origins of Burslem date back to the 12th Century, and it is mentioned in the Doomsday book. Even for that early date Burslem was a place of notable importance and the town appears in the book, as “Burwardeslyn”, a small farming hamlet.

The towns industry is derived from natural deposits of ironstone, clay and coal. Burslem was in a perfect location to provide the raw materials for pottery making.

Pottery production dates back as far as the 12th Century with the emerging industry thriving, transforming Burslem into a prosperous town as a result of good transport links and fine pottery production.

By 1650 the Wedgwood’s were producing pottery here and at the end of 17th Century Burslem was the leading supplier of pottery in Britain. Consequently the town soon became known as “The Mother Town” of the Potteries.

Burslem’s town centre is still based around the former medieval street-plan with numerous fine old buildings which have almost-totally escaped re-development during the 1960s and 1970s.

The refurbishment and structural alterations for 2-4 Swan Square were to restore the integrity of the empty buildings and reconnecting with their historical importance. By reinstating the property in accordance with the original design, historical features and the character of the street scene within Burslem’s conservation area are preserved.

The project sits in the historic core of the regeneration area so careful design consideration was given to sensitively transform the building. The grant assistance has funded works including a new roof, windows and chimneys as well as plastering, plumbing, electrical and reconstruction work.

Every element of the historic building’s renovation has been given careful design consideration to retain and restore the original character.

Croft Architecture worked closely with ERDF, HLF and SOTCC to ensure that the design for the refurbishment of 2-4 Swan Square was appropriate and sensitive to the original style of the property.

The neglected building required some consideration to bring back the original character. Over the decades the property had been internally altered to meet the requirements of the occupying businesses and exterior hadn’t been maintained.

To comprehend the extent of the restoration the interior finishes were removed to reveal the bare brick structural bones of the project. Revealing the structure enabled further assessment of the buildings core safety and determined how the project would progress safely.

Every stage of the scheme required special attention to prevent potential complications and to successfully progress the project. Working closely with the onsite team allowed for careful monitoring of the ongoing works, addressing structural or conservation concerns directly to keep the project on programme.

The project aspiration was to enhance the special character of the building, improving the structural integrity and appearance of the shop frontage within the historical conservation area.

The overall regeneration programme aims to act as an economic driver for the town, thereby restoring the urban fabric and bringing buildings back into economic use. This will lead to an increase in the choice of retail accommodation in Burslem and subsequently employment.

The project demonstrates that it is possible to achieve significant improvements in the utilisation and performance of a typical building of the area, breathing a new lease of life back into Stoke-on-Trent’s buildings, which were once part of the City’s strong industrial heritage.

The scheme has transformed a shell of a building into striking retail space with detail, character and appeal, thereby improving the appearance Burslem’s conservation area.